If I had to say something nice about 2020, it would probably be that the hops are great. 2019 was a heck of a harvest, and we’ve been enjoying the bounty all of 2020 so far. I can’t remember when I’ve been so excited about hops. These three cans are available in Tombstone and at accounts right now: 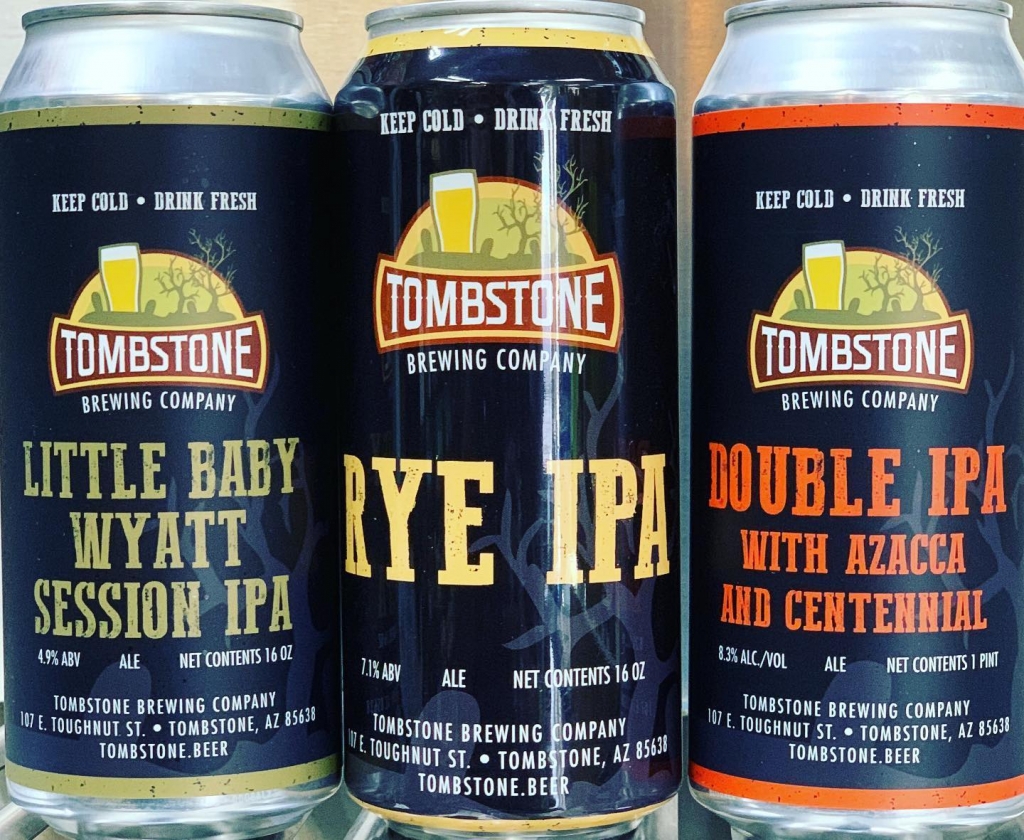 On canning day, it was fun to try them side by side and consider the remarkable difference between the three, something that’s as much affected by the hop bill as by the fact they’re three different styles of widely varying strengths.

Little Baby Wyatt Session IPA is a perennial favorite, one we usually release each May for Wyatt Earp Days. The festivities didn’t happen this year, unfortunately, but we released the beer anyway. Like the other two beers we released this weekend, it takes what you could call our hazy IPA “formula” – extremely flavorful base malt, intensely estery yeast, and a ludicrous amount of hops in the whirlpool and during fermentation – but it clocks in at an ABV that makes it easier to drink and less likely to weigh you down. That doesn’t mean it’s light on flavor or body, though. It was crazy to be able to go from a sample of DIPA to a sample of a 4.9% session beer and still be blown away by bright hop intensity and full mouthfeel of such an easy-on-the-alcohol beer.

The hops in Little Baby Wyatt are all Cashmere and Idaho 7. I usually get a lemony overripe melon quality from Cashmere and dank peachy character from Idaho 7, but together they create something totally different. Little Baby Wyatt is slightly doughy and intensely floral with tons of stone fruit, orange pith, and fresh squeezed grapefruit. It’s hard to describe just how refreshing it really is. It’s also pretty awesome one of our most popular yearly releases is anchored entirely with two hop varieties that didn’t even exist ten years ago.

The Rye IPA, on the other hand, uses a hop blend far more typical of hazy IPAs, albeit with a twist. Like our flagship IPA (if you can really call it that), it’s a hop bill of Amarillo, Mosaic, and Citra, but in addition to substituting rye in the mash bill, there’s Comet in the whirlpool. You might think of Comet as an old school hop, but that’s probably only if you haven’t had Comet from Crosby Hop Farms. Weedy and I visited them while they were harvesting Comet last fall, and we were blown away by the quality and intensity of what we got to touch and smell out in the field; it felt like we were discovering some trendy and cutting edge new variety, making it hard to believe it was a hop that’s been around for over forty years. In the Rye IPA, Comet and the other hops help to create a beer that is incredibly juicy and tropical with lots of peach and a hint of spice. I remember that the first time we brewed it, the idea of a hazy rye New England style IPA seemed strange. It worked so well that it doesn’t seem unusual at all anymore.

Last but not least, the Double IPA uses a blend of “new school” (Azacca) and “old school” (Centennial) hops in much the same way the Rye IPA does, we just make a bigger deal of it on the can. Azacca is exactly the sort of tropical, citrusy hop you’d expect to find in a hazy IPA. Centennial, which was developed in 1974 – the same year Comet was released – is one of the quintessential American IPA hops. It’s citrusy, but it’s also earthier than many of the new varieties that have since been developed. That’s what really makes this DIPA shine.

Making hazy IPAs as a homebrewer before Tombstone Brewing was a thing, people would always tell me that I was just rushing out normal beers and throwing too much Citra at them. This DIPA proves that wrong, showing just how much of what many people consider fundamental to hazy IPAs actually come from the yeast, the malt, and technique. It’s juicy. It’s unmistakably a hazy DIPA. But it’s also got loads of grapefruit pith and an herbal, dank, and almost piney quality to it. There’s even some resin in the finish, and yet the smooth, soft character, dominating hop presence, and full mouthfeel all come together to make it a juice bomb. It’s pretty exciting tasting a hop so familiar in such a new light.

We aren’t just using exciting hops in IPAs. I can hardly wait for two lagers we will be releasing in a few weeks. Here’s the first: 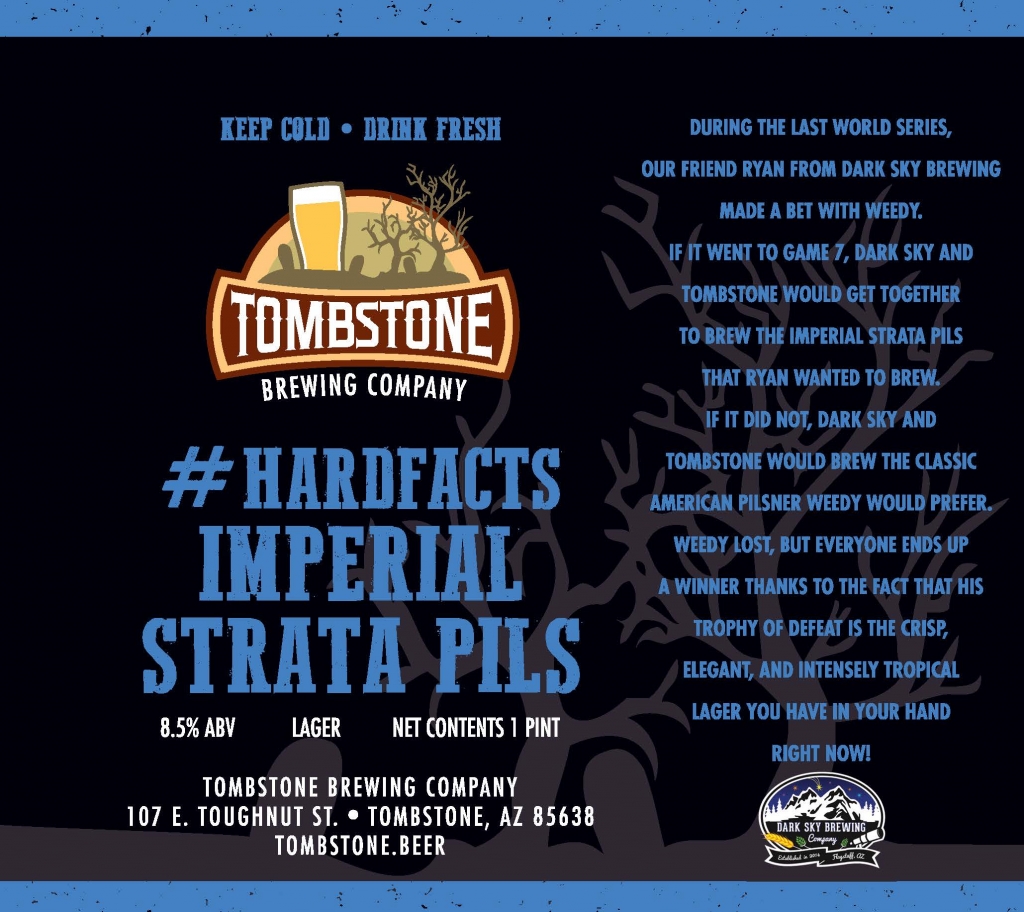 Ryan at Dark Sky Brewing came along with us for the hop harvest this last year, and I think it’s fair to say that he was as blown away by Crosby’s Strata as we were. When he and Weedy recently made a baseball-related wager, the terms ended up that we’d get together in Tombstone to brew the Imperial Strata Pils that Ryan wanted to brew if he won. Otherwise, we’d go to Dark Sky to brew the Classic American Pilsner Weedy would prefer. Weedy ended up losing, so we brewed this beer.

It’s hard to describe just how exciting Strata is to me as a relatively new hop variety. Fascinatingly, it was developed in 2009 and comes from Perle open-pollinated at an Oregon State University experimental field. In essence, it’s a pretty boring hop variety (let’s be honest; not many consumers get real excited about Perle) that was in a field with who knows what else (someone, but certainly not me), and the result of that natural pollination is true magic. Because of the process, the male parent is actually unknown.

Nearly every one of my favorite hoppy beers we’ve put out in the past year has used Strata. It’s a passion fruit explosion, and I can’t wait to see how it tastes in a strong lager. The “Imperial Pils” will probably best be thought of as a Double IPL, honestly. With about three pounds per barrel of Strata, it’ll have plenty of hop flavor and aroma. Like with all our DIPLs, it will be well-lagered, smooth, and shockingly drinkable for its strength.

And finally, we decided we would make it a double-collab and brew the Classic American Pilsner as well: 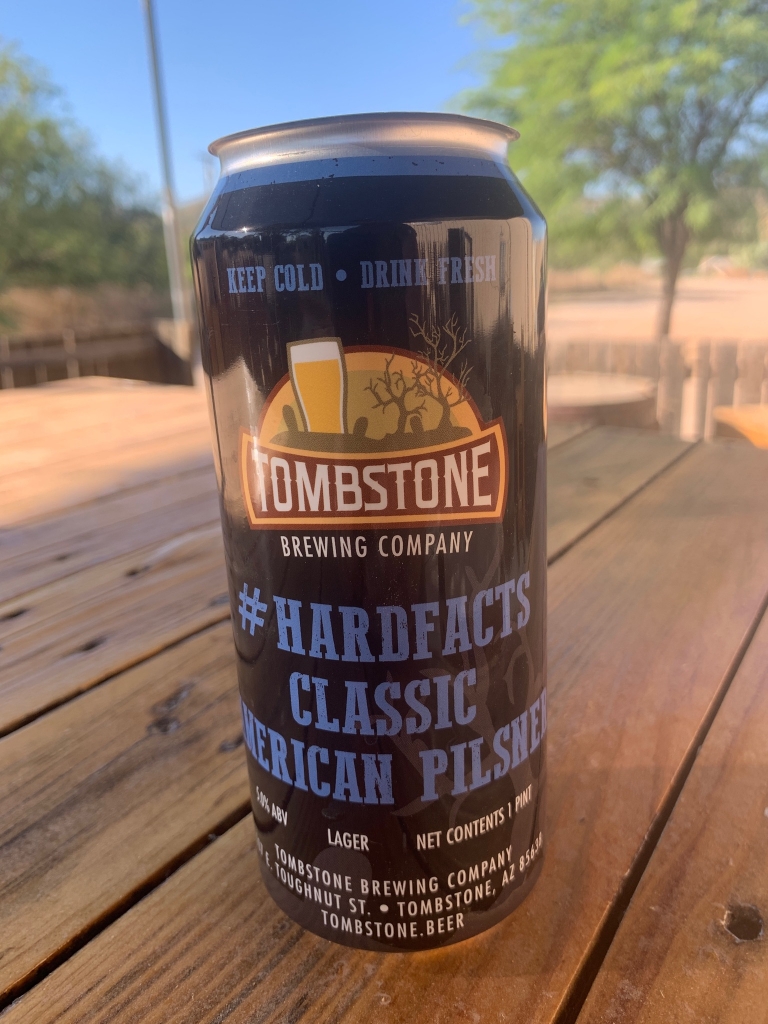 Sort of similar to how Strata’s origin is Perle pollinated naturally in Oregon with an unknown father, Motueka’s origin is Saaz bred with an unnamed New Zealand hop and grown there. Motueka is almost as unlike Saaz as Strata is unlike Perle. This Pilsner – an incredibly pale, soft, and light-bodied beer – is already showcasing the elegant citrusy and tropical character that’s made Motueka so popular since it first came out. Weedy described the flavor as key lime. I’m all in with mojito as my description. Either way, it’s already clear sampling it from the tank that it’ll be crisp, clean lager with an awesome lime character. It might be the most exciting beer for me on the near horizon.