As some of you might remember, during the last World Series, I made a bet with Ryan at Dark Sky Brewing that Justin Verlander would get his first world series win in game 6. The bet went: If the Nationals won, we had to brew an Imperial Pils using our select lot of Strata hops at the brewery of Ryan’s choosing. If The Astros won, we’d brew a Michelob clone at Dark Sky. Sure enough, Justin Verlander blew it (Should be no surprise… what ace in the history of baseball has a worse World Series record? The guys is 0-6 with a 5.68 ERA. I thought he was due), but on the bright side, Matt interjected and declared that both beers sounded delicious and that we should brew both of them in Tombstone. So I guess Justin Verlander’s 6th world series loss is really just a win for all of us.

Over the next couple months we kept joking about the Michelob clone and as I did research on the original Michelob from 1896, I started to realize that I was researching a beer that I didn’t want to be a one off beer, so I asked Ryan if he was ok with changing the terms of the bet to brew a Classic American Pilsner in the style of the pre-prohibition era lagers. CAP is actually one of my favorite styles of beer, but it’s also one of the most misunderstood styles there is thanks to the evolution of American lagers into the lowly hopped, adjunct lagers that have dominated the American beer industry post-prohibition.

The pre-prohibition style American Pilsners were actually brewed with the goal of replicating German and Czech style pilsners using American grown ingredients. When lager brewing first came to America, it was mostly German brewers that had immigrated and they tried to make beer in the same manner. They found that the barley being grown in the USA (almost entirely 6-row barley rather than the 2-row that most brewers are accustomed to) created a cloudy beer due to the high protein content. To reduce the protein content, a portion of the barley was replaced with low protein starches, most notably corn or rice. The goal at that point in time was not to produce a cheaper beer and in fact, there are many instances of beer journals being shared in Europe that discussed American beer and their use of adjuncts. Many of the world renowned brewers at the time declared that American beer was of equal quality to European beer. Of course, American brewers believed that they weren’t just equal quality, but superior and that 6-row barley was a superior ingredient to 2-row. In fact, in 1908 a member of the FDA who was tasked with creating national standards for beer in America (who believed that an American beer purity law, or American Reinheitsgebot, should be imposed) declared that a tombstone should be inscribed “Hic jacet cerevisia malti” or “Here lies the all malt beer.”

Other than the use of 6-row barley and adjuncts, the American Pilsners were brewed in much the same manner as their European counterparts. The beers were heavily hopped with American grown (or in the case of a few breweries like Anheuser-Busch, imported hops were used) noble hops, lagered for long periods of time, and they were exceptionally pale and crystal clear. In the early 1900’s, 2-row barley growing was increasing in acreage and some brewers did switch to 2-row, but continued to use adjuncts to help create a very dry pilsner. That is the era that we decided to pay homage to with our version of a CAP.

We used mostly 2-row pils malt with just enough flaked maize to keep the color very pale and the body very dry. Instead of using traditional hops, we opted to use New Zealand grown Motueka which is derived from Saaz. Instead of getting the earthy, floral flavors that saaz is known for, the Motueka provides a strong key lime flavor. The beer was heavily hopped to get us up around 40 IBU’s. Perhaps most interestingly, we used a very clean lager yeast strain and fermented under pressure at a very cold temperature to reduce any ester formation in an attempt to give the impression of even greater crispness of mouthfeel than would normally be possible. The pressurized fermentation is normally something that large breweries do in order to help speed up their fermentation and lagering time since they can reduce esters while fermenting warm. We went all in with the cleanest fermentation profile possible by fermenting under pressure at the cold temperature while also giving the beer its full lagering time as we always do. At 5% ABV, this highly carbonated, well hopped, dry American Pilsner is the palest beer we can produce and it’s the perfect beer for hot weather. 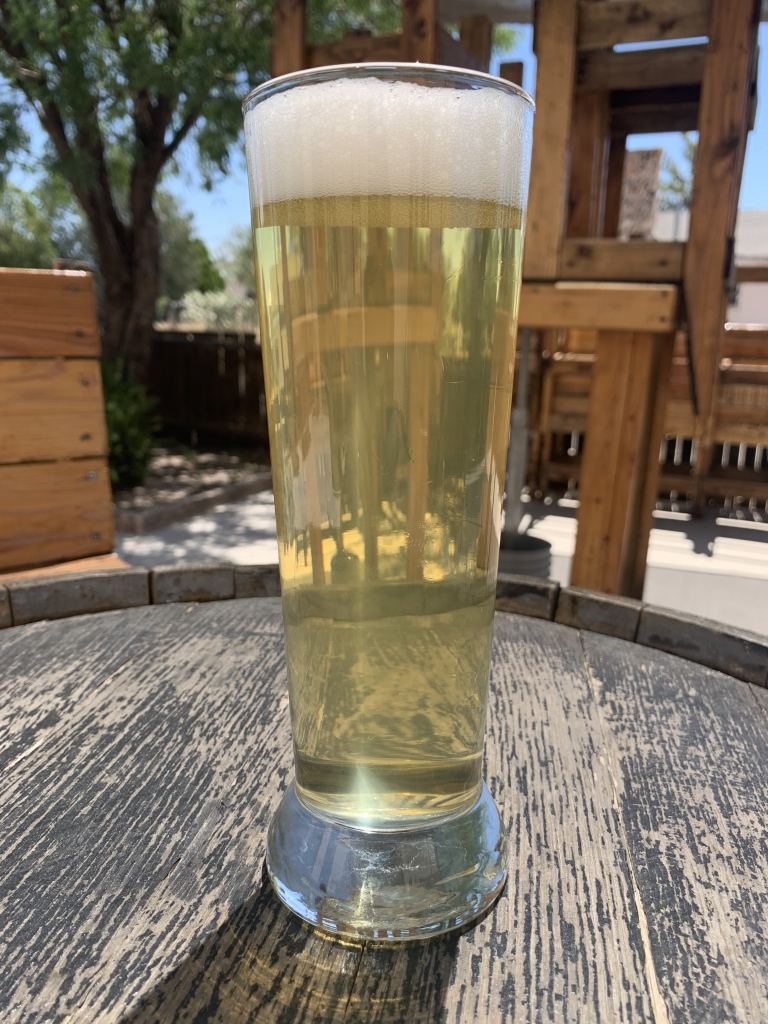 The second beer is an Imperial Pils with Strata. This beer I think is revenge for all the times I’ve poked fun at Ryan when I tell him that Pilsners brewed with Citra, Amarillo, or other new American hops aren’t really Pilsners. If I was the one deciding what we called this beer, it would be Strata DIPL or Strata IPL. At this hopping rate and with the use of a heavy dosage of dry hops, we are much more in line with a modern IPA. However, whatever the beer is called, it is a deliciously hoppy, high gravity lager bursting with passionfruit flavor and it really gives the Strata a chance to shine in a different way than how we’ve used it in the past.