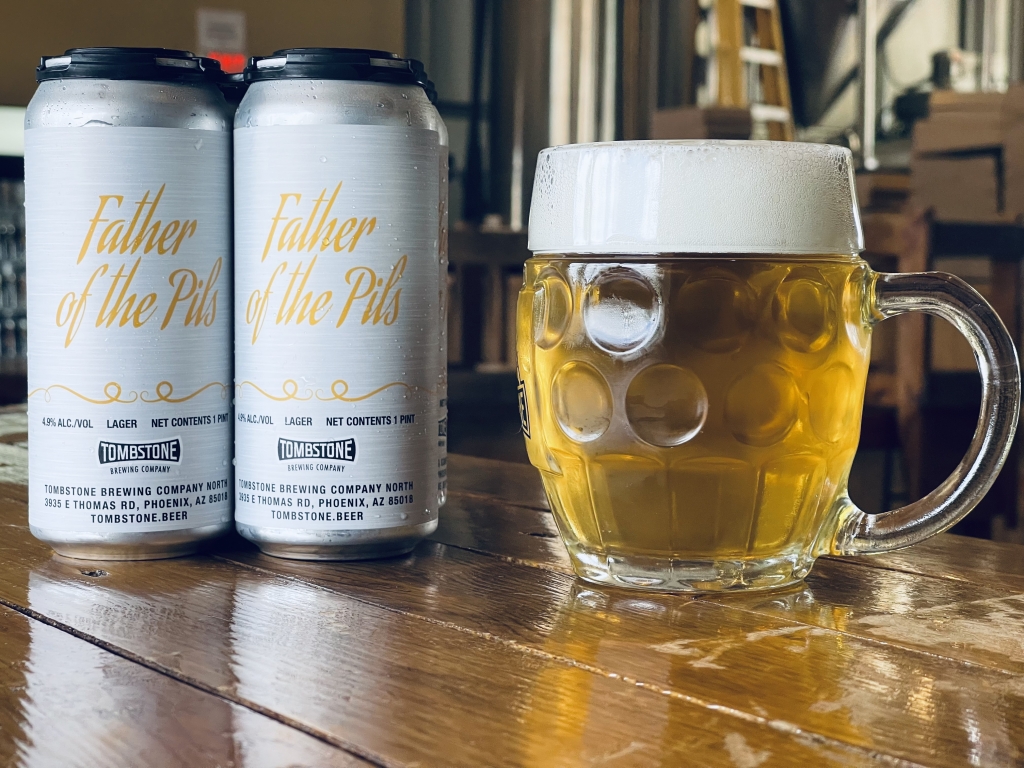 A question I get asked frequently is how I come up with what to brew. It’s a kind of funny question to me because there isn’t necessarily a process for how to come up with a beer I’d like to brew. I consider myself very fortunate to be in the position to be allowed to brew basically whatever I’d like to when the inspiration strikes. The most rewarding way that I find an idea to evolve is to let things take place naturally and spontaneously rather than to sit down and force myself to come up with an idea. In fact, it rarely ever works that anything that I get excited about sharing with our customers started with feeling like I had to come up with something new. In the case of the beer we canned today, Father of the Pils, this is one of my favorite ways to brew.

About 2 years ago I got really into the idea of reproducing the original Michelob as brewed by Anheuser Busch in 1896. We got a little bit side tracked on the journey to brewing that beer due to pandemic related production delays at our yeast lab and we called an audible for the first batch which ended up being our recreation of the beer that inspired Anheuser Busch’s original Michelob. We named that beer after the original Michelob brewer, Anton Dreher. Not realizing we were starting a series of Pilsners, a couple months later we brewed the beer that we had originally set off to brew. Taking inspiration from August Busch’s marketing for Michelob that beer was named Beer for Connoisseurs. About a year after having brewed that beer I was reading about Anton Schwarz and his contributions to the history of beer and I felt that his work was largely forgotten or scoffed at amongst beer purists. We released Der Amerikanische Bierbrauer in his honor in an attempt to show that the type of pilsner that he introduced to American brewers was not the cheap, flavorless adjunct lager that we think of today, but rather a quality Pilsner reminiscent of a Czech Pils.

Somehow throughout all of that, it never really hit me that Tombstone had never brewed a very traditional Czech Style Pilsner. In fact, I never used to care much for Czech Pilsners as my preference has always been for the dryer, crisper German style Pilseners like I was drinking while studying in Munich. The more we’ve brewed of these Pilsners that were inspired by Czech Pilsners, the more I learned to love them. At some point, it got to where I personally needed to brew a real Czech style example. As the idea of brewing this beer evolved it gradually turned into a near obsession. I’ve always loved reading the history of beer styles and I ended up realizing that what we had wasn’t just another one off beer, but part of a series of these historical recreations. This time, the beer would be named after another famous brewer, Josef Groll: The Father of the Pilsner.

In the late 1830’s the citizens of Pilsen in the Kingdom of Bohemia started to prefer lagers rather than the more common ales of the time. Unfortunately, a lot of beer was spoiling and getting dumped in the city and, looking for a solution, the burghers of Pilsen founded a citizen’s brewery and hired an experienced lager brewer from Bavaria, Josef Groll to satisfy their demands for higher quality lagers. Groll had experience brewing at his father’s brewery, but had never had much success as a brewer. At the time, almost all malts were kilned to a much darker color than modern malts which naturally made beers more copper-amber in color at their palest. Groll had traveled to England to see modern malt houses that were producing exceptionally pale malts for use in ales and he was able to install modern equipment at his new Bohemian brewery. In doing so, he was able to produce the first pale lager known to exist in the world. Aiding in his ability to produce pale beer was the fact that the water in Pilsen was exceptionally soft. Additionally, the soft water allowed him to use a high quantity of hops without creating a harsh, lingering bitterness.

When the Burgher’s Brewery released the first batch of Pilsner Urquell in 1842, the new beer took off in a way that the world had never seen with lasting effects. Today it is estimated that 90% of the beer brewed in the world can trace it’s lineage back to the original Czech Pils.

For us, to honor Josef Groll’s contributions to the beer world appropriately was a bit of work. We were fortunate to be able to source floor malted pilsner malt which was malted in the Czech Republic’s oldest malthouse. The use of low oxygen brewing techniques and cold fermentation allowed us to fully capture the delicate malt flavors. Only the highest quality Saaz would cut it for replicating a traditional Czech Pils. The use of a stepped mash and long boil allowed for us to replicate the traditional flavors and mouthfeel of a decoction and to achieve the more golden color typical of a Czech Pils rather than the straw-yellow color of a German Pils.

The end result is a perfeclty rustic Pilsner, well balanced between the intense grainy pils malt flavor and the earthy, floral Saaz hops with enough bitterness to enhance drinkability and the perception of crispness, while still being a clean, fast bitterness that doesn’t linger or detract from the quaffable nature of a well brewed Pils.