By the time I arrived, unloading was already underway: 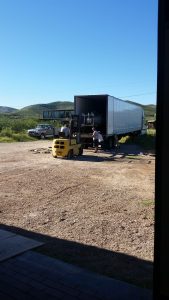 Some things, like the diverter panel and platform, were pretty easy to remove: 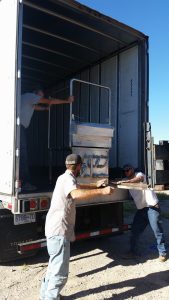 The kettle/whirlpool and also the mash/lauter tun were pretty easy to get out with a forklift and some extenders: 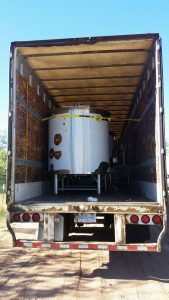 The fermenters weren’t tricky either thanks to our highly competent forklift guy: 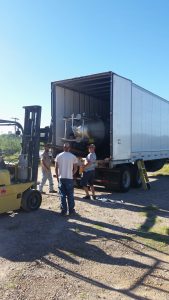 We got them all lined up pretty fast: 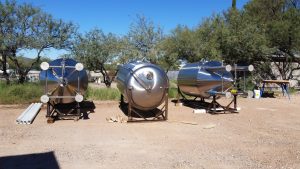 For a second, we thought we’d be having a few beers and admiring the fruits of our labor in no time. We were, of course, totally wrong. That’s thanks to this guy and his twin brother: 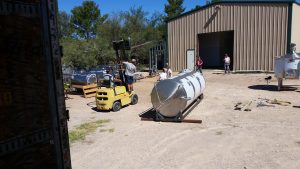 A 45bbl hot liquor tank and a 45bbl cold liquor tank seemed like a great idea on paper. There’ll probably be some point in the future when we’re doing more than one batch in a day and feeling pretty glad we went big. The brewer will no doubt be quite happy about all of that hot and cold water at his disposal. But he didn’t have to move those things.

Not only do they weigh about a ton (almost literally), but the cradles were awkward for moving them on their side, they were too tall to get in standing up anyway, and getting them stood upright inside and then put in place on their special little pads turned to be a nightmare.

The couple of hours it took to carefully put the cold liquor tank right where we wanted it were so intense I didn’t get a single photo. Here’s the hot liquor being stood up next to it later, though: 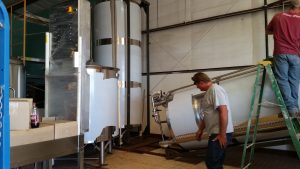 The process involved some creative forklift techniques, some come-alongs, and eventually a two-ton engine hoist, which cut our time in half for the second tank. Placing the other vessels was a breeze after those beasts: 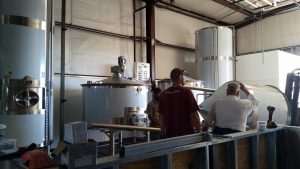 And getting the grist hopper into place, which would’ve seemed tough if it weren’t for what we’d just been through, took no time at all: 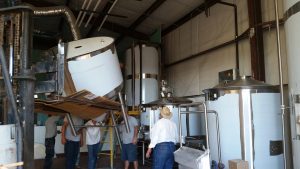 Without the amazing guy operating the forklift, we’d have probably just canceled the brewery altogether and sent the trucks back to British Columbia: 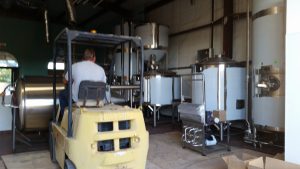 Instead, we ended the day with every piece of equipment in place: 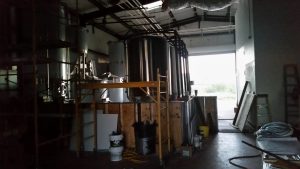 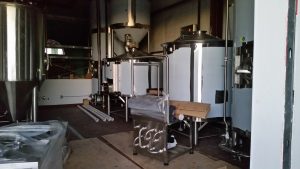 Minor positioning details were very straightforward. Things hooked up pretty nicely when we did it the next morning.

The brewery is now home to a 15bbl two-vessel steam system built for us by the good people at Specific Mechanical Systems. We’re one step closer to beer!