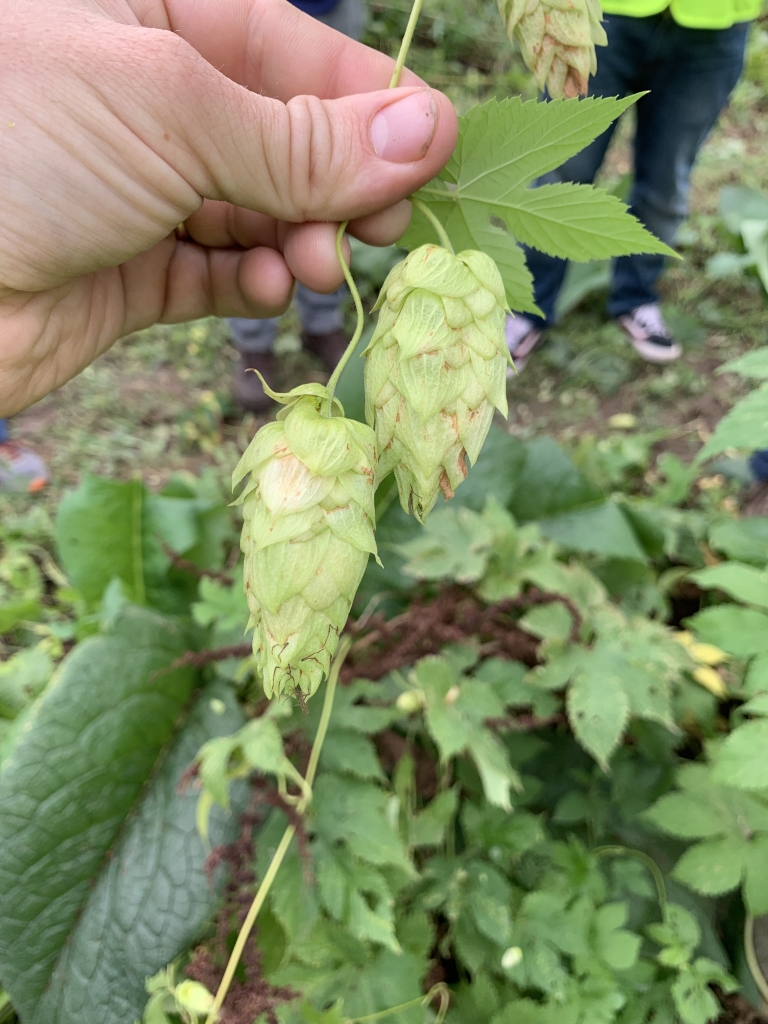 What a week it has been! I brewed my first wet hop beers 6 years ago and ever since then, September has been a roller coaster of emotions alternating between excitement and dread. The actual brew day for wet hop beers is intense and a logistical nightmare, but the reward is so worth the extra effort involved. For the last 5 years, I’ve had a kind of bonus reward with September being time for my annual trip to visit our hop farmers for hop lot selections.

Last week, we received our overnight shipments of wet Amarillo. The hops had been harvested by Crosby Hop Farms in Oregon and they arrived at the brewery less than 24 hours later where I had a kettle full of boiling wort waiting for the hop addition. Keeping true to the Tombstone tradition of using gratuitous amounts of hops, 500 lbs of Amarillo came on this shipment and we used our mashtun as a sort of giant hopback. Since we can’t have two batches brewing at once when we brew this way, our normal 10 hour brew day gets lengthened out to about 17 hours. The unique flavors of wet hop beers and the fact that we can only do this once a year makes it an exciting time to be at the brewery. 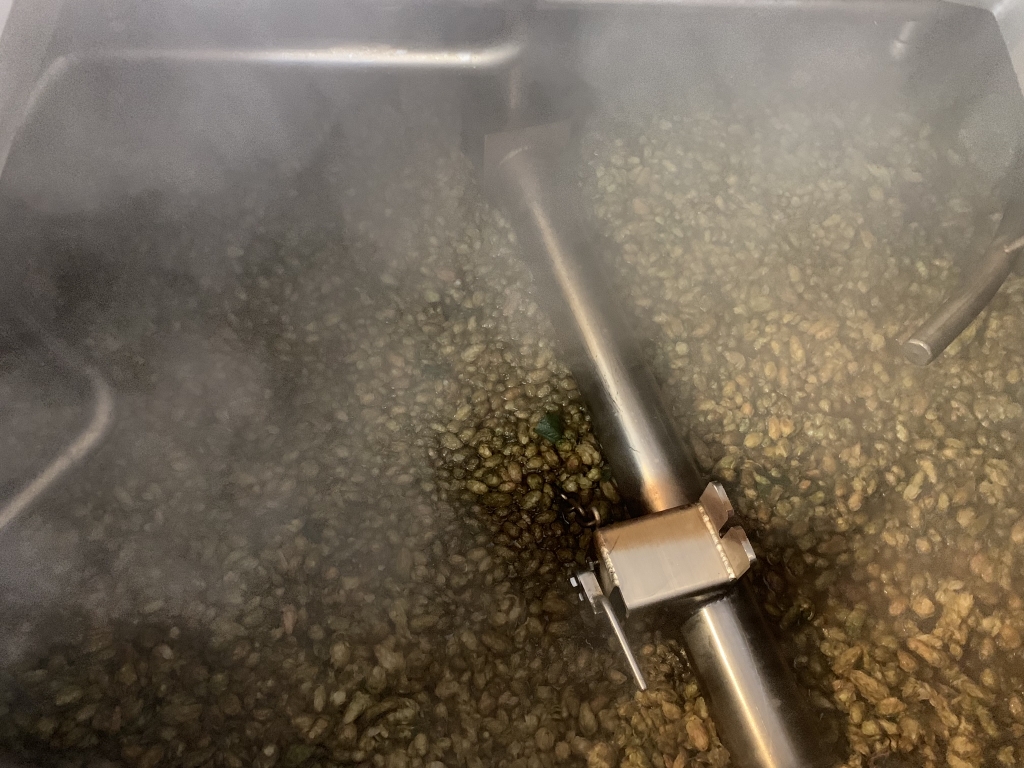 Hops mixing in the mash tun with hot wort. 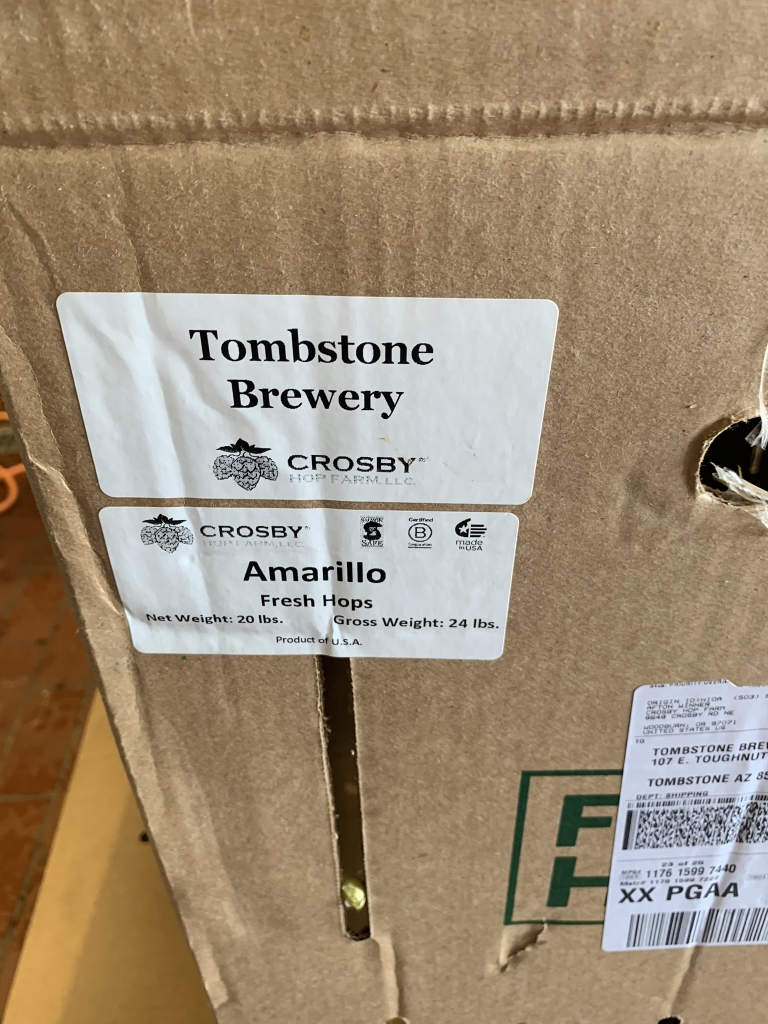 25 boxes arrived in Tombstone, AZ less than 24 hours after being harvested in Woodburn, OR. This is our first chance to smell the hops we will be using for the upcoming brew year and we were definitely not disappointed with what we found! Ruby red grapefruit was the dominant aroma with a hint of the grassiness that you expect to find in freshly harvested hops. 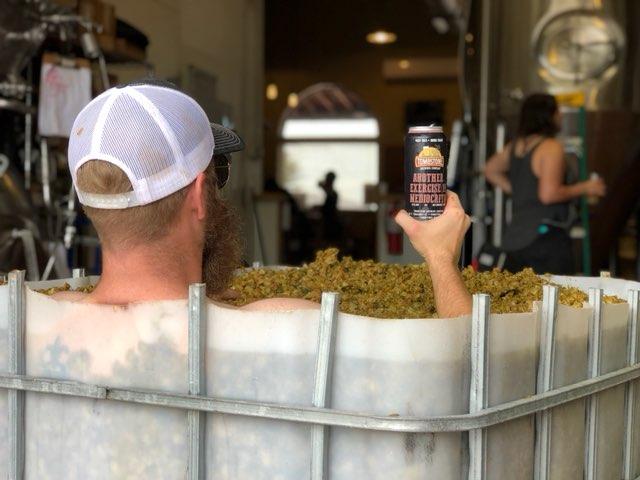 I’ve been wanting to do this for forever… at the end of the brew day, I got to relax in a hot hop tub. That’s what I call living the dream! *The hops were already used and ready for disposal at this time.

I had just enough time after brewing these wet hop beers to dry hop them on my way out of town. It was pretty awesome coming home from the airport and pouring a sample. The intensity of the ruby red grapefruit aroma combined with the peachy and tropical esters typical of our yeast strain and the hint of grass clippings resulted in well balanced, highly drinkable beers with very low bitterness.

After smelling the wet Amarillo, my excitement level to get up to the farm was through the roof. It is no secret that we are very selective about the hops we use in our beers, but what a lot of people might not realize is the lengths we go to in order to have access to these varieties. We only sign hop contracts that allow for us to select individual lots of hops. This year, the hops we contracted are Amarillo, Strata, Idaho 7, Comet, Citra, Mosaic, and Simcoe. This first trip of the year was all about selecting Amarillo.

Adding to the fun this year, Matt and our friend Ryan from Dark Sky Brewing joined me for the selection. It was great getting to have some company this time around and this might have been the most educational trip I’ve had out to the farm ever since I started selecting lots.

The trip to the farm started at 9:00 a.m. and we were lucky to be the very first brewery of the year to be selecting Amarillo. We did a quick walk around the shipping and receiving warehouse while we waited for our selection room to be set up. When our room was ready, we walked in to find 3 different lots of Amarillo waiting for us. For those unfamiliar with what a “lot” is, typically a lot is just one field of hops and a grower might have several fields that get harvested. In Crosby’s case, it’s a little bit different since some fields take 2 days to harvest, so 2 of the lots we smelled came from the same field, but were harvested on back to back days… that might sound insignificant, but the hops can be very different with just one extra day on the vine.

In past years, the decision has been an easy process with one of the lots standing out above the rest right away. This year, all the lots we were selecting from were amazing, but the lot we selected was the latest of the Amarillo lots that was harvested. The extra days on the vine allowed for a greater complexity to the aroma which included a hint of a sugary quality that I find desirable to compliment the bright ruby red grapefruit. After the Amarillo selection, we got our first peak at the Strata we would be getting this year… only one Crosby grown lot of Strata is available, so no lot selection was necessary. Smelling the Strata was the moment where I just felt like a kid on their first trip to Disney World. The oil content was through the roof and the passion fruit aroma that we love with that hop was unreal. Of all the hops I’ve used in my brewing career, there’s none that have been as exciting to me as this Crosby grown Strata. 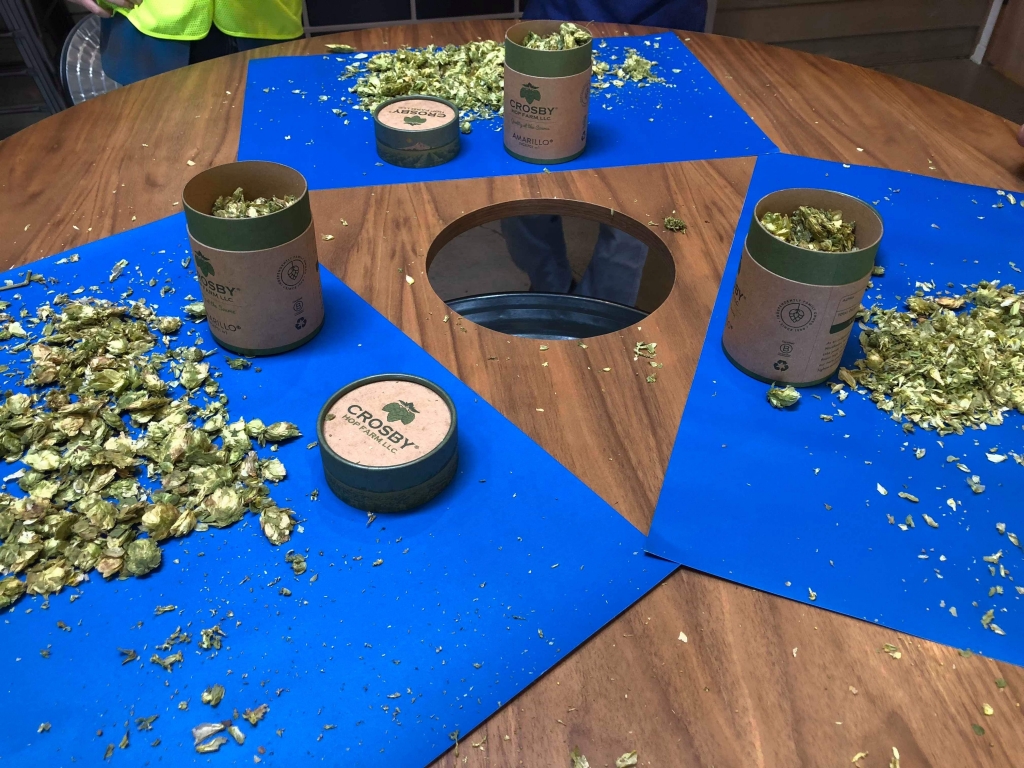 Our Amarillo selection room set up. For selection, I request that no data is made available to me to start. I do a smell test, run the hops in my hands, and smell again. After getting an initial impression, I ask for the analytics and then make the final decision.

After doing the selection, I always like to tour the entire operation since I learn something new every year. One of the most eye popping things this time around was getting to smell other Amarillo that we were not including in our lot selections. For years, I had been under the impression that my preference for Crosby grown hops had to do with the terroir in the area, but to my surprise, the other lots that we smelled, even though they were grown just a few miles away, smelled like a diluted version of the hops grown by Crosby. It turns out that the farming practices are perhaps even more important than the terroir. To my surprise, Crosby’s hops had about 50% more total oils than the average expectation for each variety. 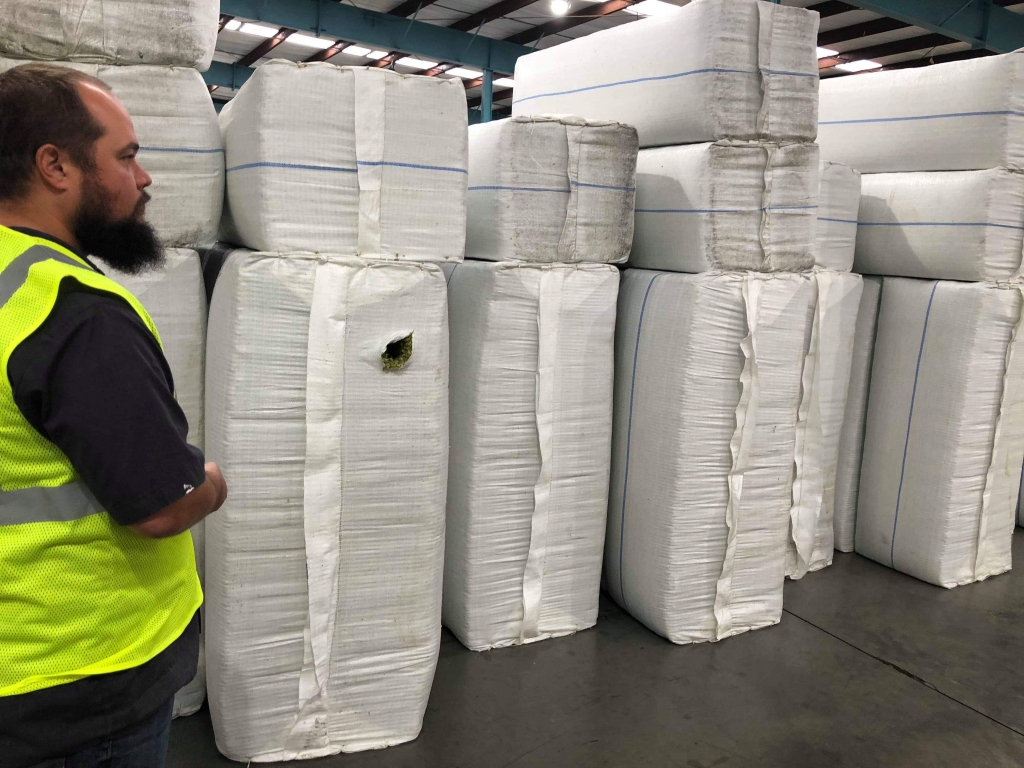 Walking through the shipping and receiving room, we got to smell a few other lots that were not available for selection. On average, the Crosby grown lots had 50% more total oils than other growers. 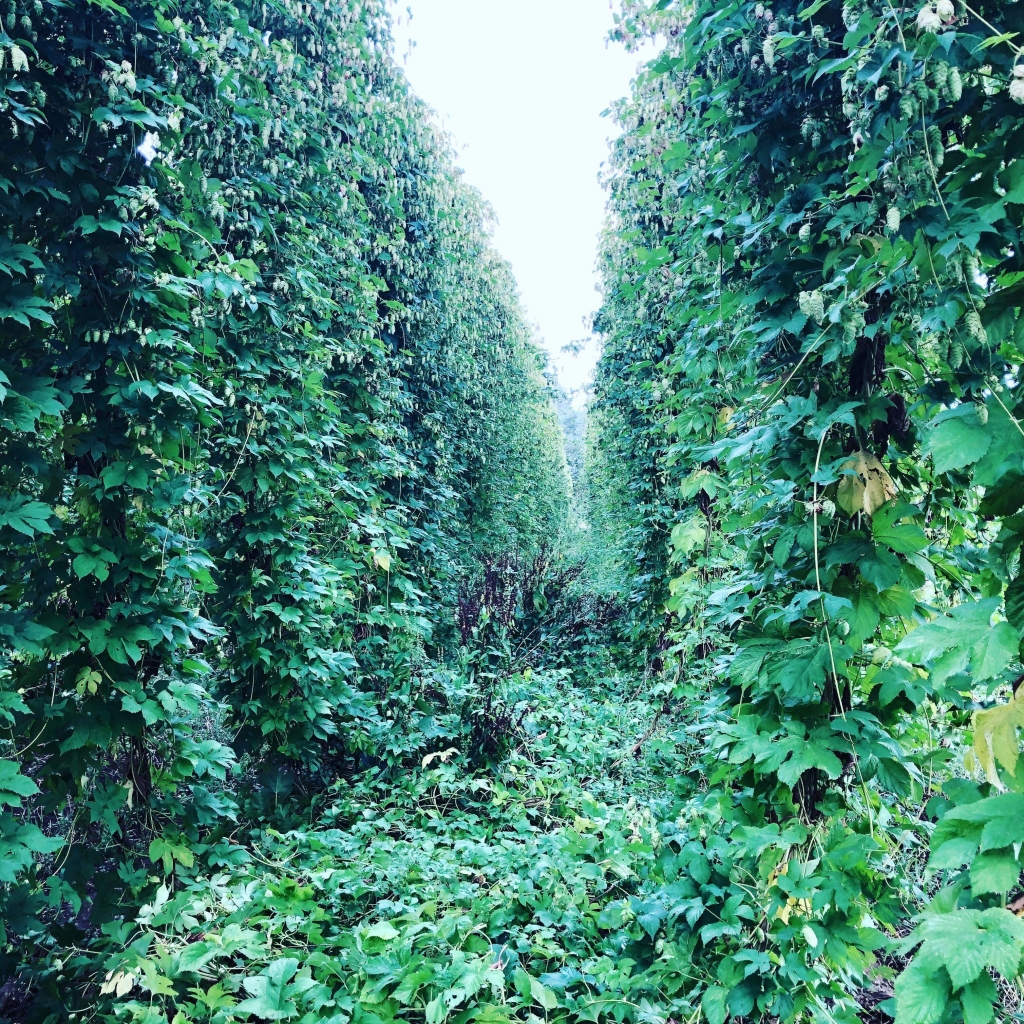 Hops growing in the fields. The vines are 18’ tall… the real Field of Dreams 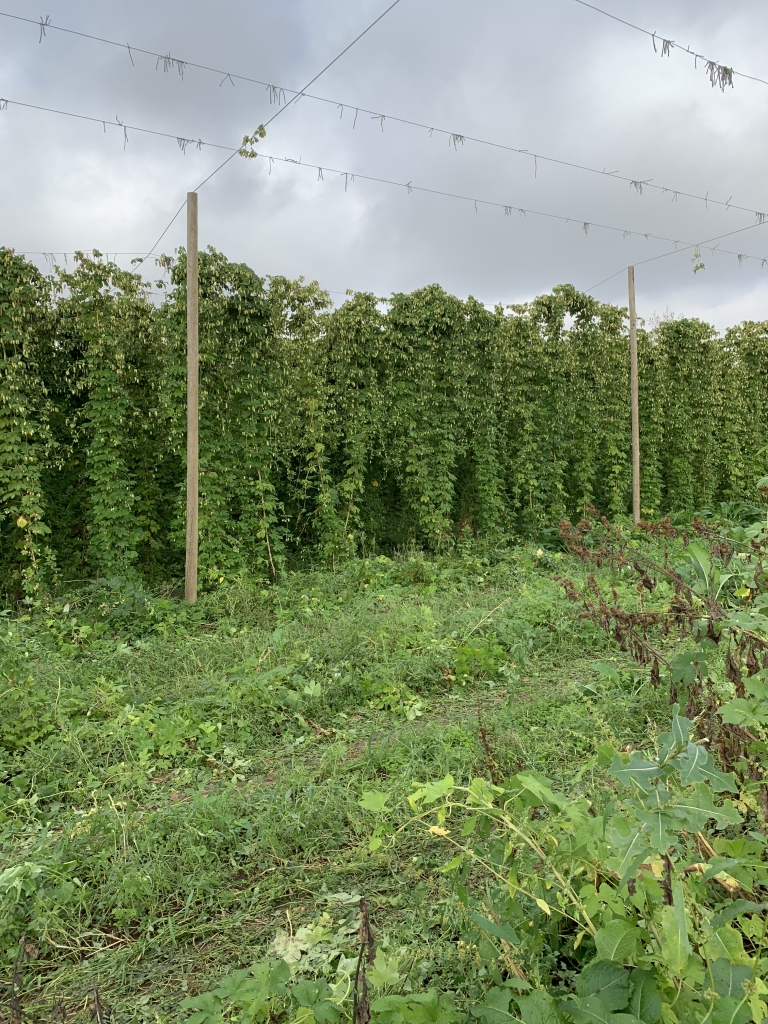 Our first opportunity to smell the Comet we will be using this year. Straight off the vine, the aroma is unrivaled. This is an experience every beer lover should experience at some point in their lifetime. 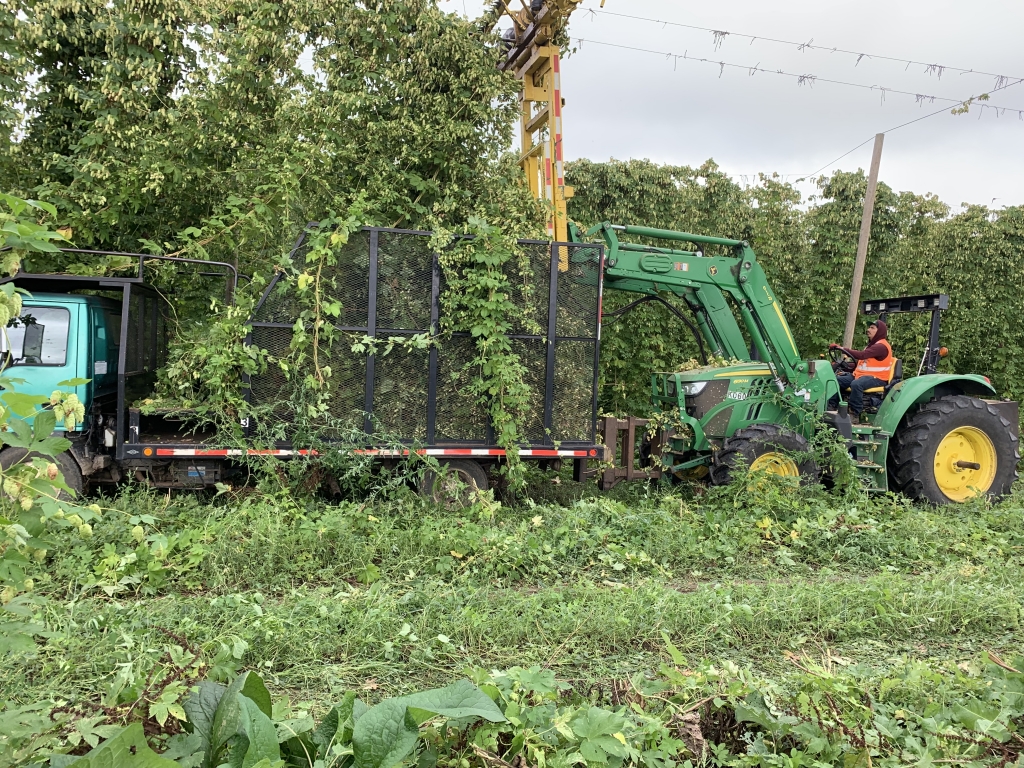 It was a rainy, muddy day. The truck that cuts the vines needed a bit of assistance from a tractor to get through. Waiting for a dry day isn’t an option since hops are such a volatile crop. 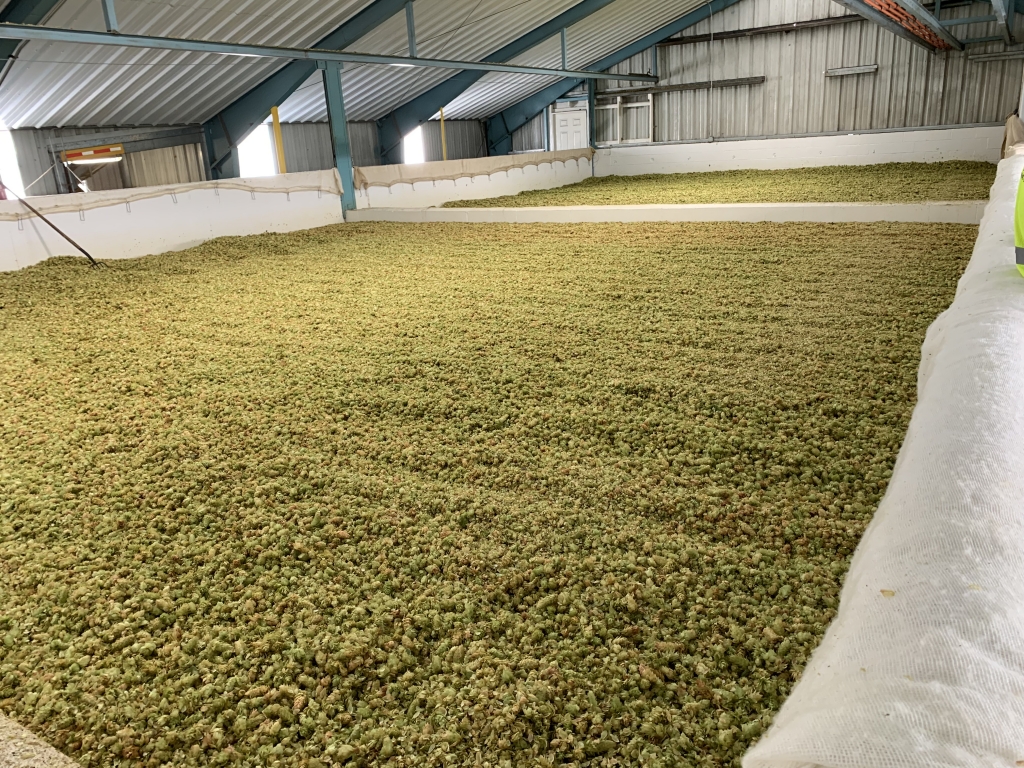 After the hops are rattled from the vine, they go to a kiln. Radiant heat comes up at about 130°F to dry the hops for 4-8 hours. Walking in this room is an IPA lover’s dream. 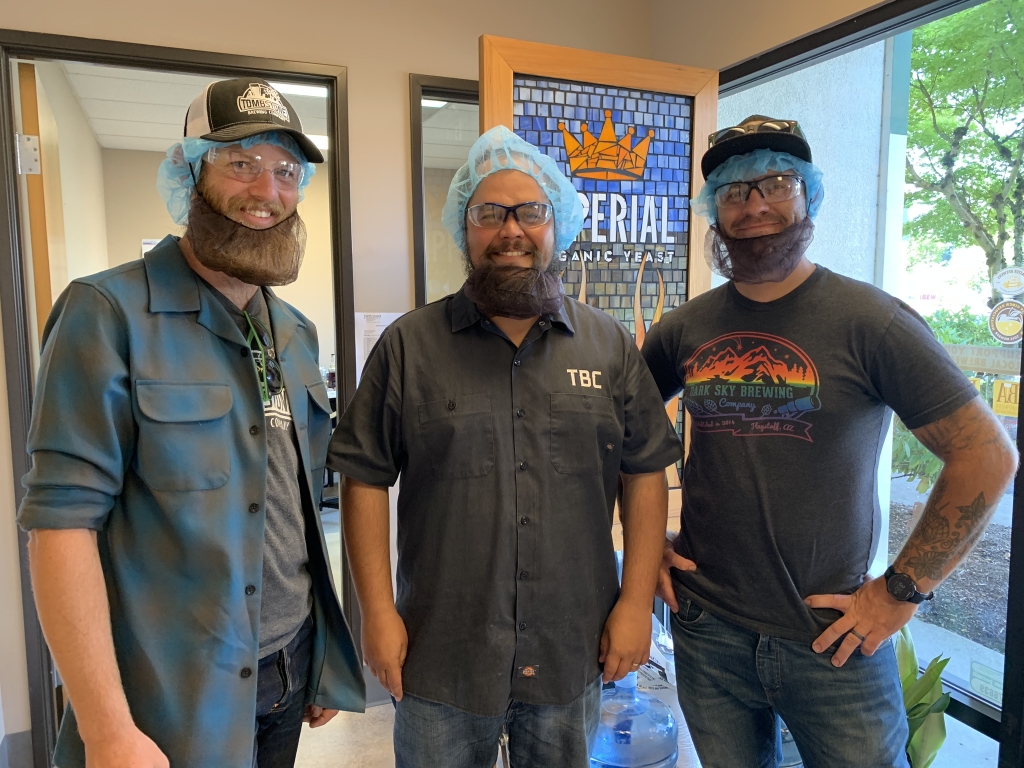 After touring the facilities, Matt, Ryan, and I set off to tour our yeast lab in Portland to maximize what was already An extremely productive day… maybe more info should be saved from this trip though for the TLDR crowd

I’ve got one more trip out to the farm in a couple weeks to check on the rest of our hops, but even after the exhaustion of this trip, I already can’t wait to get back one more time this year!