It’s still hard to believe that 2 weeks ago, we bought a brewery in Phoenix. It was a wild ride announcing that we were moving in, having the taproom open 4 days later, and production beginning that same week. In pretty typical Tombstone fashion, we hit the ground running and filled all 6 fermenters there in a 3 day span. We were lucky to have Dustin from Helio Basin showing us the system on the first batch and helping us out. We were able to make a seamless transition and hit all of our expected numbers with the temperatures, yield, and efficiency right away from batch one.

The first batch of beer that we brewed at the new brewery was a saison. In Tombstone, we’ve avoided saisons for the simple reason that our original brewhouse doesn’t have the ability to perform a stepped mash. When we conduct a mash in Tombstone, the mash stays at one constant temperature. With a saison though, it’s very important to be able to start at a low temperature and raise the temperature to a few different rests. The mash tun at Tombstone North is steam jacketed which allows for us to start cool and raise the temperature properly. Being able to start the mash at 115 degrees allows the release of ferulic acid which is a precursor for the clove like flavors that saison yeast is well known for. Without the release of ferulic acid, the beer won’t be appropriately phenolic. After the ferulic acid rest, we raised the temperature to about 142F to break down starches into the simplest forms of malt derived sugars which results in a very highly fermentable wort, meaning the beer will be very dry. We then raised the temperature again to 158F to make sure any remaining starches were broken down. This was a beer that we’ve talked about wanting to be able to brew ever since we opened Tombstone Brewing Company, but we didn’t do it simply because we didn’t have the proper equipment to do it the way we wanted.

The saison recipe development started with the idea of brewing a very traditional saison. 100% Pils malt, yeast from a Belgian Saison producer, a proper mash, etc. but I was intrigued by a slightly different concept with the hops. In a traditional Belgian or French Saison, you’d expect noble hop varieties with a hop schedule somewhat similar to a Pilsner. Moderate bitterness would be expected with a grassy, spicy, and slightly floral  hop aroma to go along with the phenols and esters typical of saison yeast. However, when we brewed our Classic American Pilsner with Dark Sky Brewing earlier this year, I grew to really love the Motueka hop character and I thought the soft key lime flavor would pair really well with the fruity esters and spicy phenols. Motueka is described as being bred from Saaz hops, but according to at least one grower, it’s actually not bred from Saaz… It is in fact Saaz that takes on a different flavor due to the terroir in New Zealand. Drinking beers with Motueka definitely gives the impression of some noble hop flavor, but that key lime flavor is so distinctive, I thought it would make a great twist on a classic saison. All of the bitterness (about 35 IBU) in our saison comes from Motueka in the whirlpool (similar to how we brew our IPA’s but with a slightly smaller amount of hops) and to boost the noble hop character a little bit, we took a slightly unconventional approach and dry hopped with Tettnang hops. The end result of this beer is a very dry, 6% abv saison with complex and distinctive notes of orange marmalade, key lime, cloves, and a slight lemongrass finish.

After brewing the saison with Dustin, I was on my own the next day for brewing a Triple IPA named “Big Fish Little Pond” and an IPA named “Little Fish Big Pond.” These IPA’s feature a lot of the same attributes that you might expect from Tombstone hazies… Floor Malted Maris Otter for a distinctive malt base, huge whirlpool and dry hop additions of the choicest Strata, Citra, and Mosaic, estery yeast that leaves a slightly creamy mouthfeel, and a huge hoppy aroma. These were interesting to brew since it’s more of a direct comparison to what we brew in Tombstone. The brew days went off without a hitch and the beers taste just like you’d expect from Tombstone. Having RO water and the same size system at each location makes it very easy to match flavors between the two locations. The IPA has a huge peach aroma, pineapple, and ruby red grapefruit. The Triple IPA at 10% ABV is all passionfruit, peach, and cantaloupe with no boozy heat and great drinkability for the alcohol percentage.

We then moved on to two beers that we’ve been talking about brewing for a long time but haven’t been able to fit into our schedule in Tombstone where we only have 3 fermenters. One of them, an Oak Fermented English Mild, is one that we have actually brewed before but it saw very limited distribution so most people that tried it would have had to travel to Tombstone to get it. At 3.5% ABV, you might expect a beer that lacks flavor or is watery, but thanks to a high mash temperature, very flavorful English malts, and the oak addition, this mild has a full body and plenty of flavor. The upfront sweetness of the malts melds perfectly into the oaky vanilla character and the low ABV makes it a perfect session beer.

The other beer brewed that day was a Chocolate Oatmeal Porter. This is a similar recipe to what I had brewed years ago in Alabama and I’ve been wanting to bring it to Tombstone basically ever since we opened. This is a traditional English porter with chocolate malt and oat malt. Unlike flaked oats which mostly provide a creamy mouthfeel to beer with little flavor contribution, oat malt provides a distinctive grainy oat flavor. A blend of pale chocolate malt and regular chocolate malt gives the beer its bittersweet chocolate notes. At 5.8% ABV, this beer has the body of a much bigger beer.

The final beer brewed in our first round is probably the one that I’m most excited about. When I studied in Munich, I had a long weekend due to a national holiday and I used my time to visit Cologne and drink Kolsch. I’ve always been intrigued by the subtleties of Kolsch and it’s a style I’ve always loved. When I got back from Cologne I talked with one of my professors who has a lot of experience with Kolsch breweries about the brewing techniques. I was told that there’s a Kolsch yeast that is sold from a North American yeast lab that calls it a wheat beer yeast. I looked it up and sure enough, that yeast actually originated from a Kolsch brewery and is used by a large American brewery in their American Wheat Ale. The origin of the yeast is not something that the lab or the American brewery will share, but I began brewing with it shortly after returning from Germany. It provides a subtle strawberry like ester to go along with the kind of typical Kolsch yeast Riesling flavor.

Being a bit of a purist when it comes to Kolsch, it’s very important to me that every aspect of it was done in a way that would make a Cologne brewer proud. We used entirely heirloom barley varieties, the bulk of which is Pilsen malt with just a touch of Vienna, low oxygen brewing helped to preserve the subtleties of the barley varieties, Hallertauer Mittelfruh hops for flavoring, and a cool fermentation to create a lager-like fermentation profile. In addition to the recipe being traditional, it’s also important to me that the beer is served in its proper manner.  After 2 more weeks of lagering, our Kolsch will be ready to serve in 200 mL stanges.

Other than the Kolsch, each of these beers will be kegged on Saturday, 10/31. We can’t wait to share our new beers from the new brewery with you! 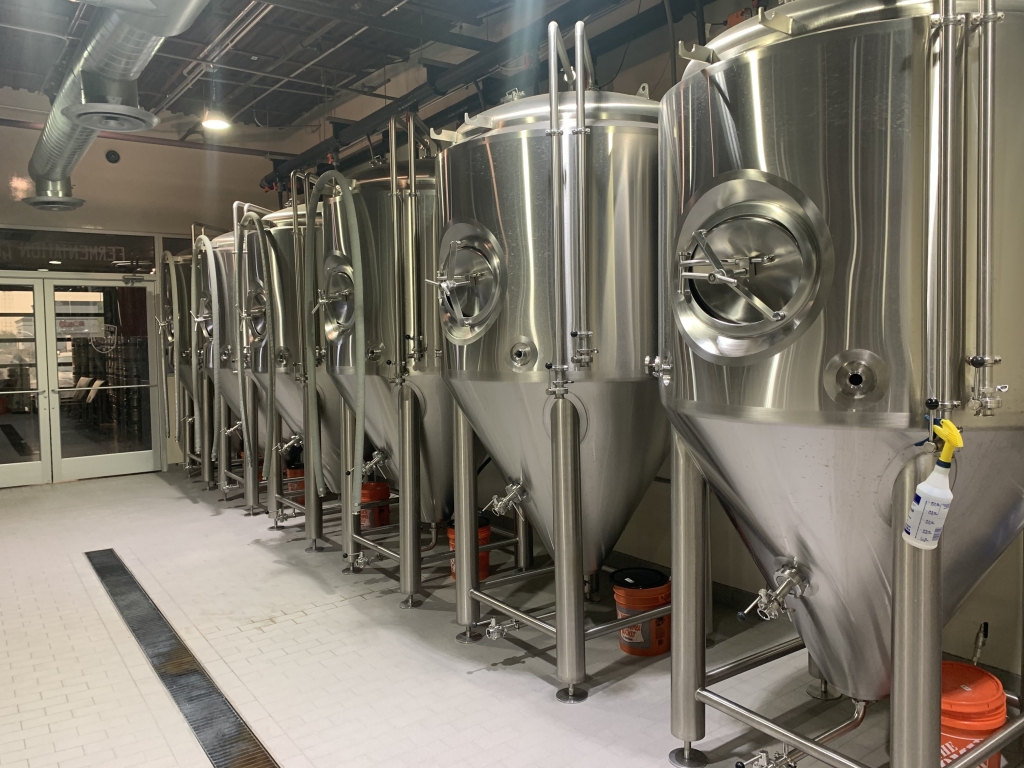