Although we’d arranged for the canning line to be delivered at 8:00 a.m. this morning, I showed up fifteen minutes early to an angry trucker who’d been waiting for me for quite some time, apparently. Weedy pulled up a few minutes later, and when the driver opened the back of the trailer, here’s what we saw: 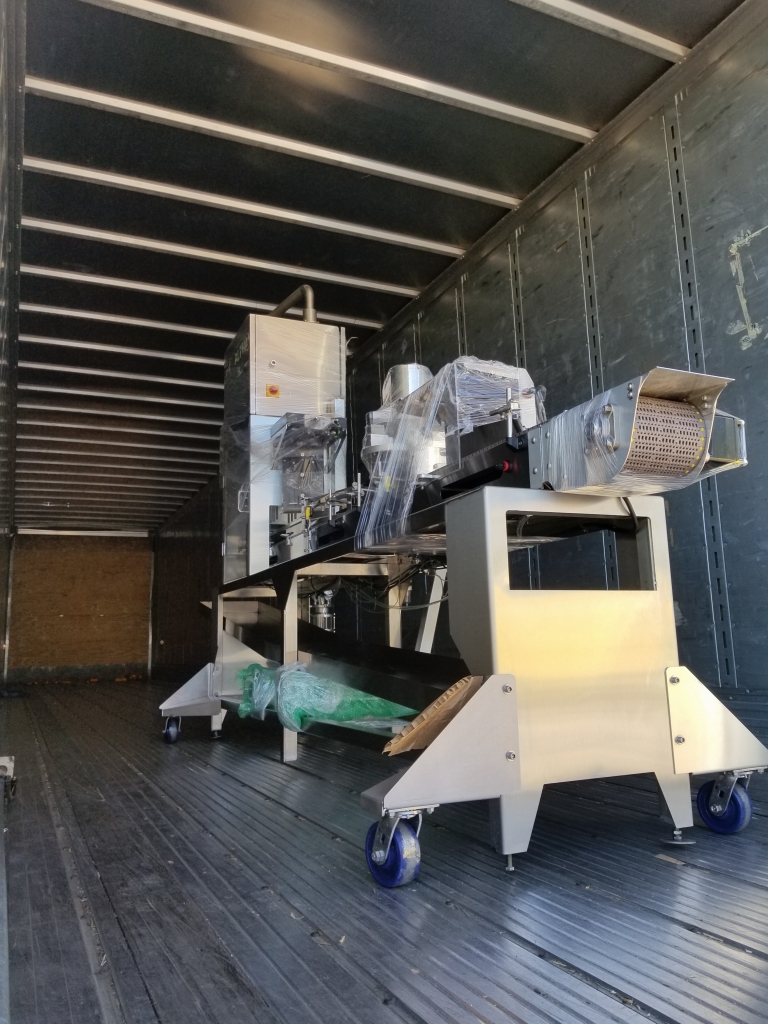 It was beautiful. Shiny. Industrial. Without a doubt the most badass canning line I’ve ever seen. I imagined the thousands and thousands of cans it was going to fill with delicious beer starting very soon. The guys at Alpha Brew Ops make an awesome looking machine, and what we’ve heard about its performance in trial runs up to now makes it even more exciting.

But it was also not on pallets. And the truck didn’t have a lift gate. Ruh-roh.

Depending on who you ask, the thing weighs anywhere from 1700 to 3700 pounds. Sure, the line is on wheels, but we don’t have a bump dock and the truck is pretty high off the ground. The line is really long as well; too long, in fact, to turn sideways in the truck to grab it in the middle with the forklift. Plus, one side is much heavier than the other. And our geriatric forklift is generously rated for  a maximum of 3000 pounds. So how do we get it from the back of the truck safely onto the ground?

The Jeopardy song should’ve been playing as we came up with brilliant plan after brilliant plan. Stack pallets up to truck level and roll it onto them until we can try to get it in the middle with the forklift? Find fork extensions and round up everyone in the neighborhood to hang off the back of the forklift while praying furiously that the line and the lift don’t spectacularly topple over?

The irritated driver kept proposing plans that involved us snatching the line in precarious ways while he drove out from under it. It was obvious he had dreams of speeding off as the line came crashing to the ground, yelling “see ya’ suckers!” from the cab as he rushed to get his next load.

As we sat there taking in the ineptitude and certain disaster that characterized all of our ideas, another truck pulled up. It was a grain shipment, though we never get grain shipments on Fridays. And the truck had a nice long lift gate. On top of that, the driver happened to be the best driver ever, a nice guy who came out smiling, competent and obviously happy to help. We were in business.

I’m not going to go into too much detail, but we moved the line from one truck to another and the impatient trucker was able to leave. That started with the two trucks coming together:

And here was the start of rolling the line over the lift gate into the second truck: 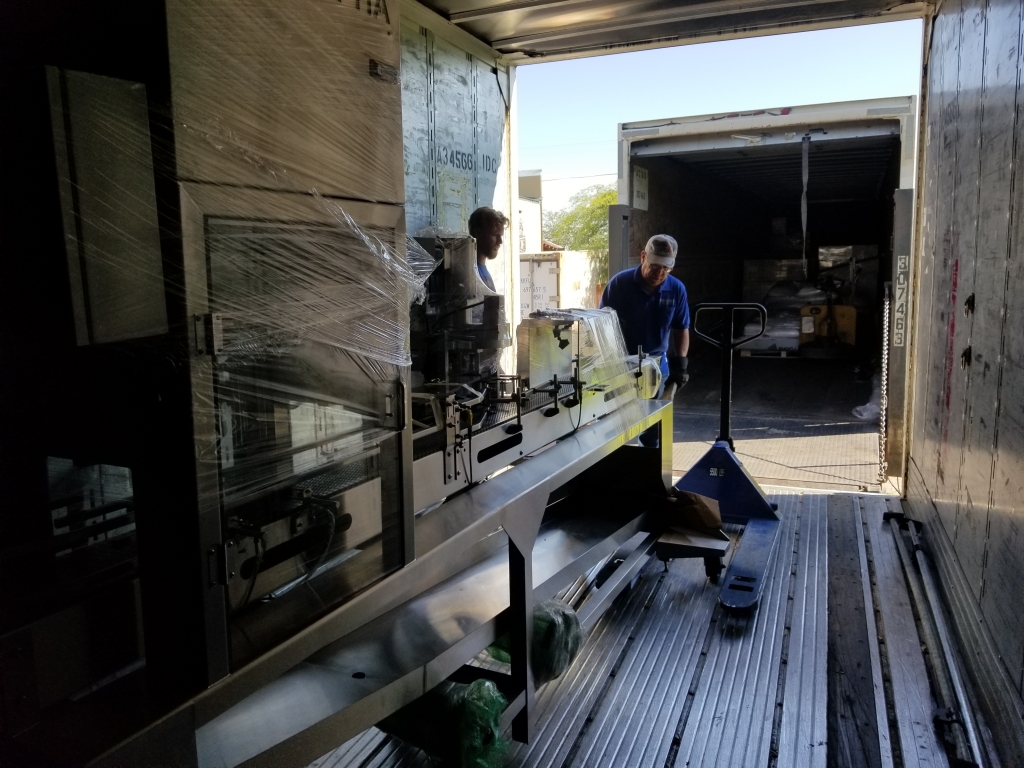 The lift gate still wasn’t quite long enough to lower the line, but with some plywood, some creative pallet jacking, and the most terrifying lift-gate-and-forklift simultaneous-lowering ever seen in the Town Too Tough to Die, we went from no options to here: 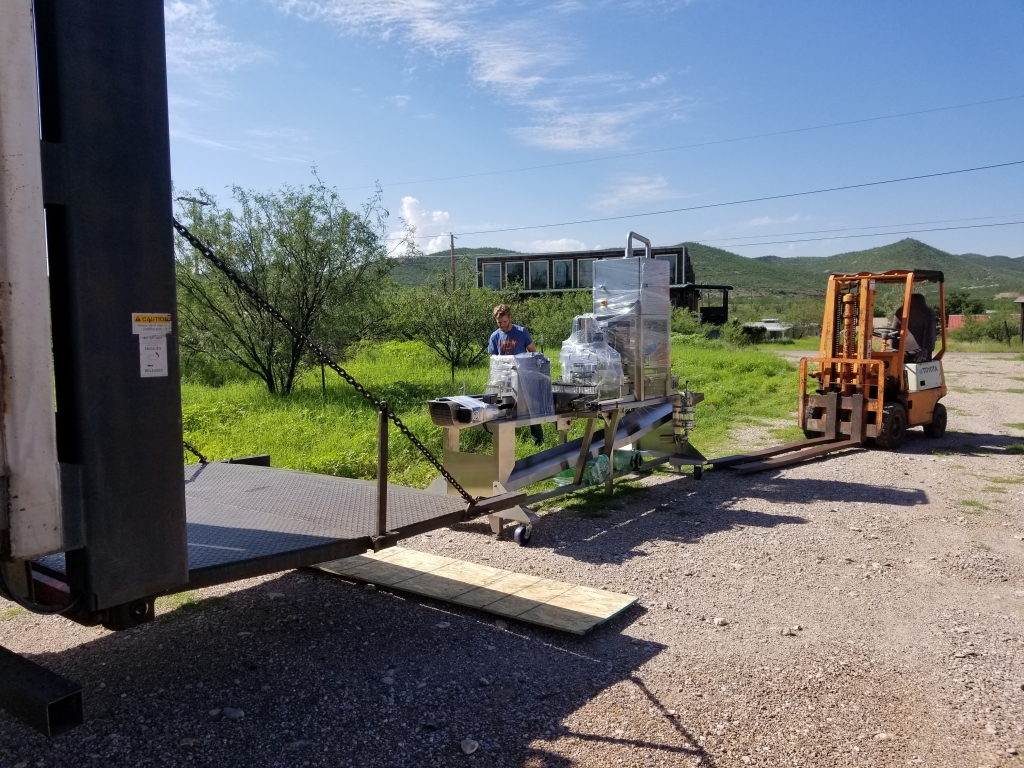 The line looked lovely in front of the distant mountains and hills outside of town: 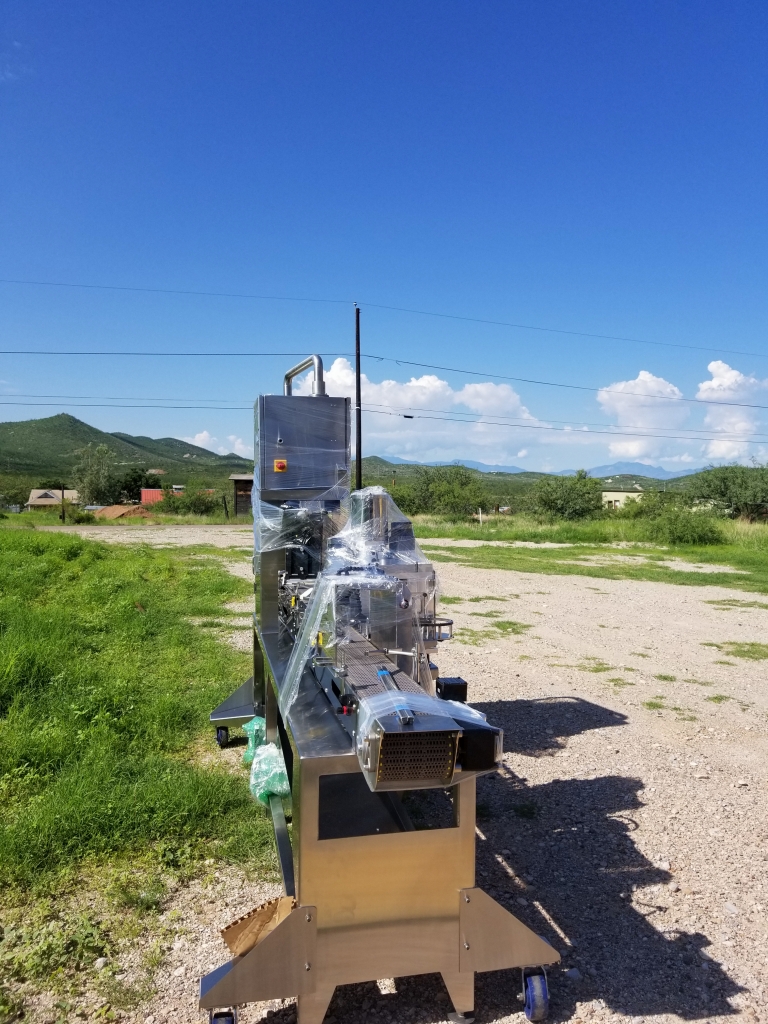 We said farewell to our new hero, the greatest trucker who ever lived, as he drove off into the oppressive heat of late morning:

Man am I on a roll with lame videos.

Finally, just a bit more creative pallet jacking got the line safely inside the brewery: 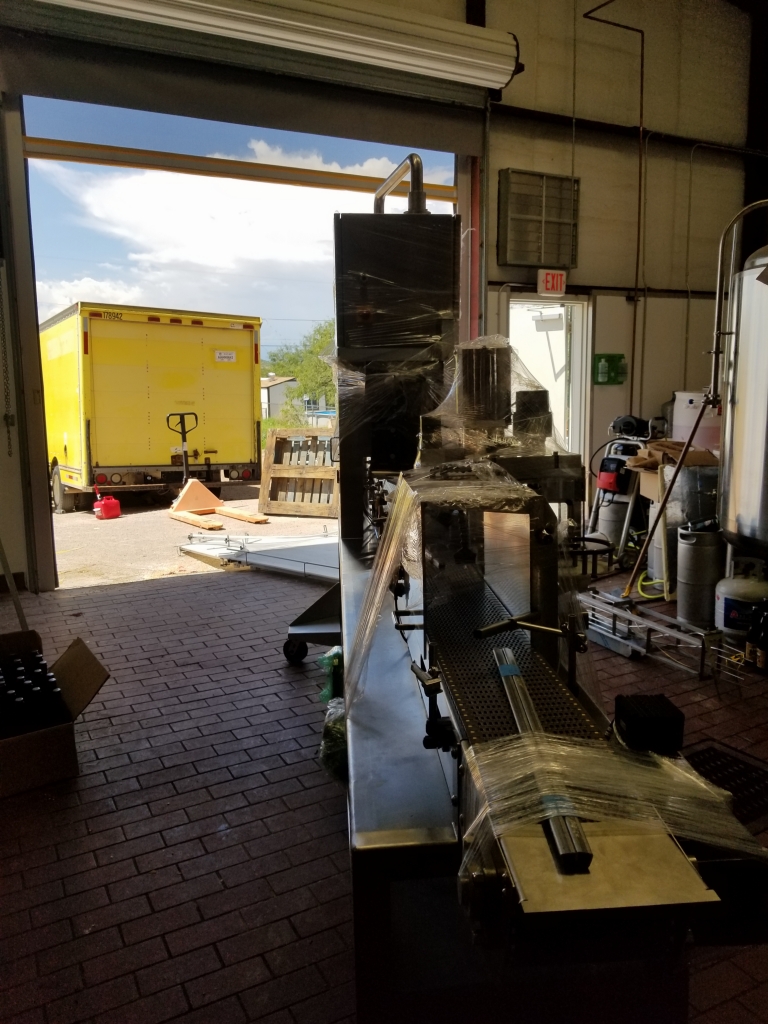 From there it was pretty simple. Assembling the manual depalletizer was basically playing with a giant Erector Set: 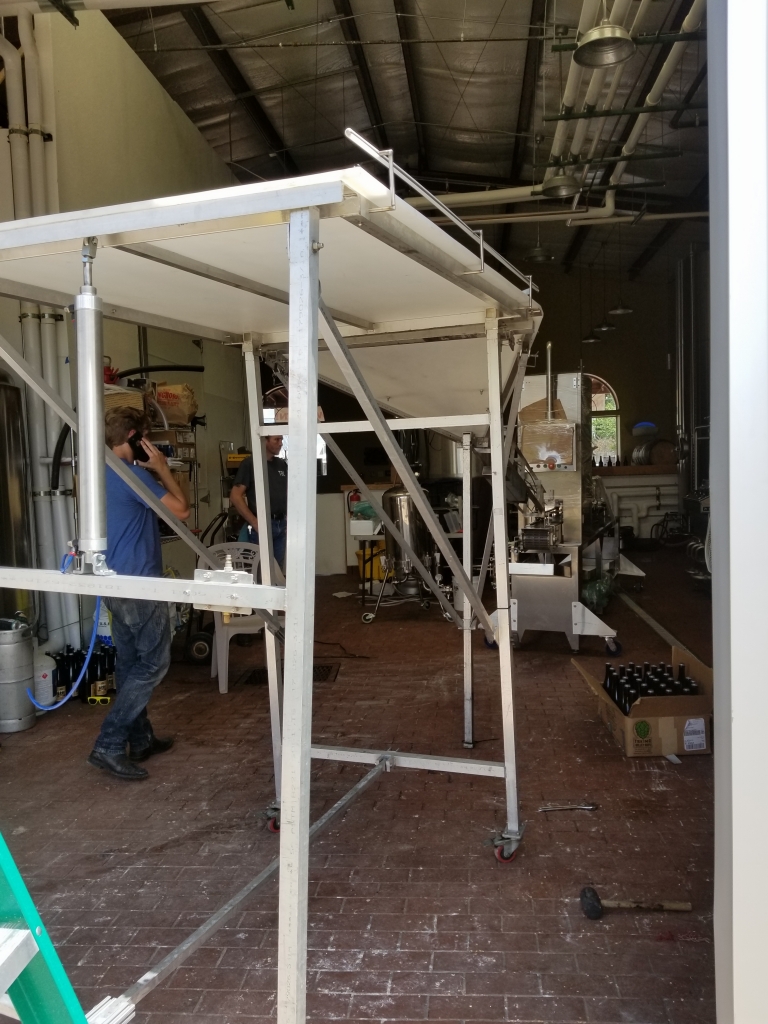 Before noon, we were pretty much ready to go: 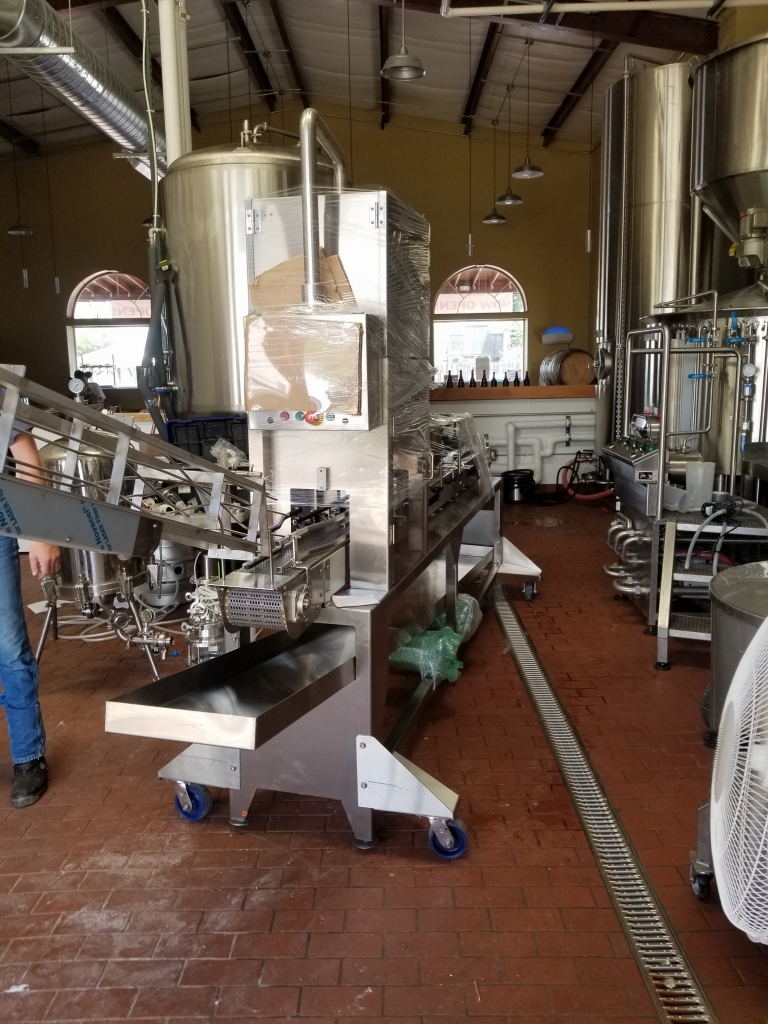 Well, aside from the million other things we have to do, that is.

But the important thing is that we have the canning line, it seemed to suffer no damage during shipping, and we have a tech from the manufacturer coming to help with the final setup, test runs, and initial canning. We’re on track to have cans available at the brewery and shipped to accounts statewide this coming week!