It’s going to be a big weekend for us, as Saturday will be our very first release of barrel-aged beers in cans. Here they are, five barrel variants of “Not Really A Barleywine:” 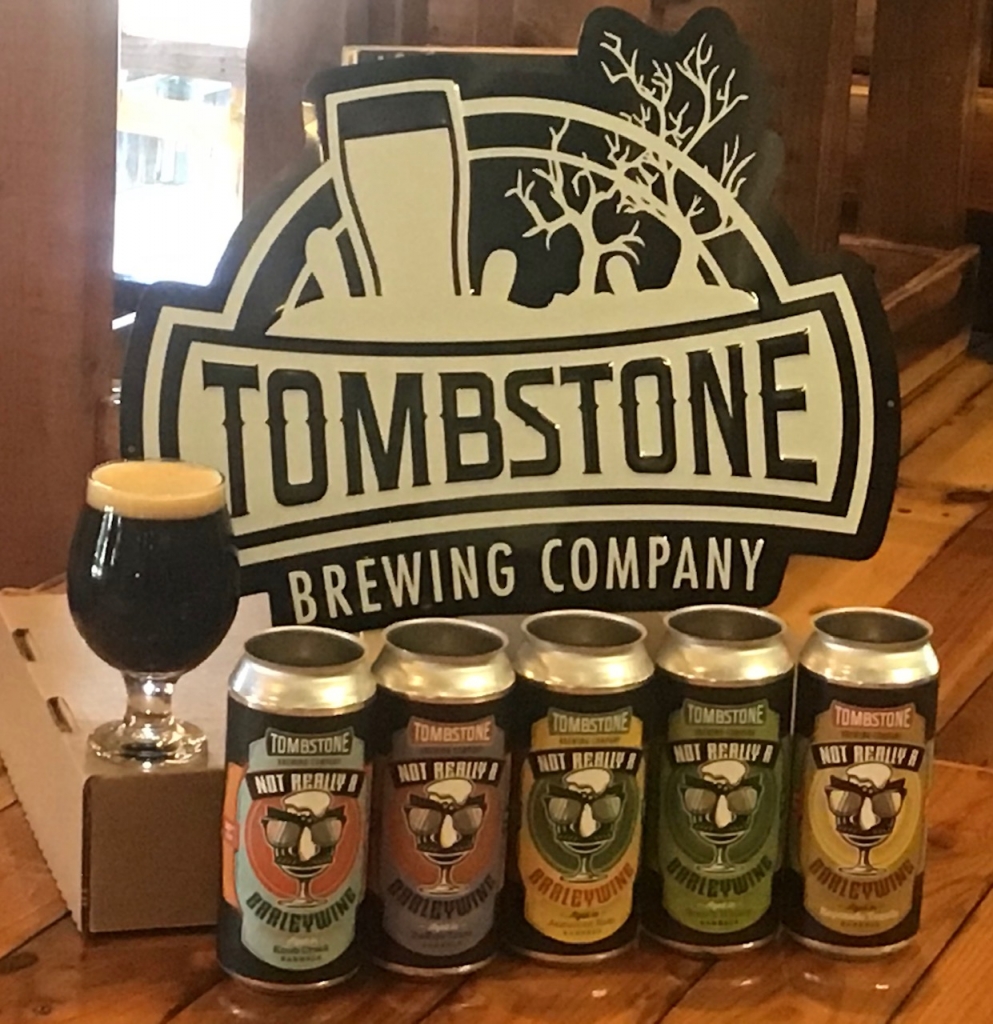 If you don’t remember the base beer, Not Really A Barleywine came out in early 2019. The idea of the beer was that the sort of barleywine we had been making up to then – a traditional example of the style made almost entirely with floor-malted Maris Otter and utilizing a very long boil for color and flavor development – was not indicative of where the market was going. We decided to jump on the hype train and brew a much darker, thicker interpretation of the style. We weren’t totally comfortable calling it a barleywine given that it was so far from how we viewed the style, though. Hence the name.

The beer ended up massively popular despite the unusual name. Sure, a few people who understood why we were hesitant to call it a barleywine just wished we’d brewed a traditional example, and many people who only drink trendy modern barleywines didn’t understand the branding at all, but people liked the liquid in the can enough that the name didn’t matter in the end. When it went into barrels, the description on the can was accurate: rich, thick, and dark brown with huge notes of toffee, caramel, and fudge. It’s not surprising people loved it.

For the barrels, we chose Knob Creek, Buffalo Trace, and Jamaican Rum as the safer, more standard options. To mix it up, we filled a Reposado Tequila and a Scotch Whisky barrel with the beer too. After over thirteen months, it came out of the barrels even better than we expected: 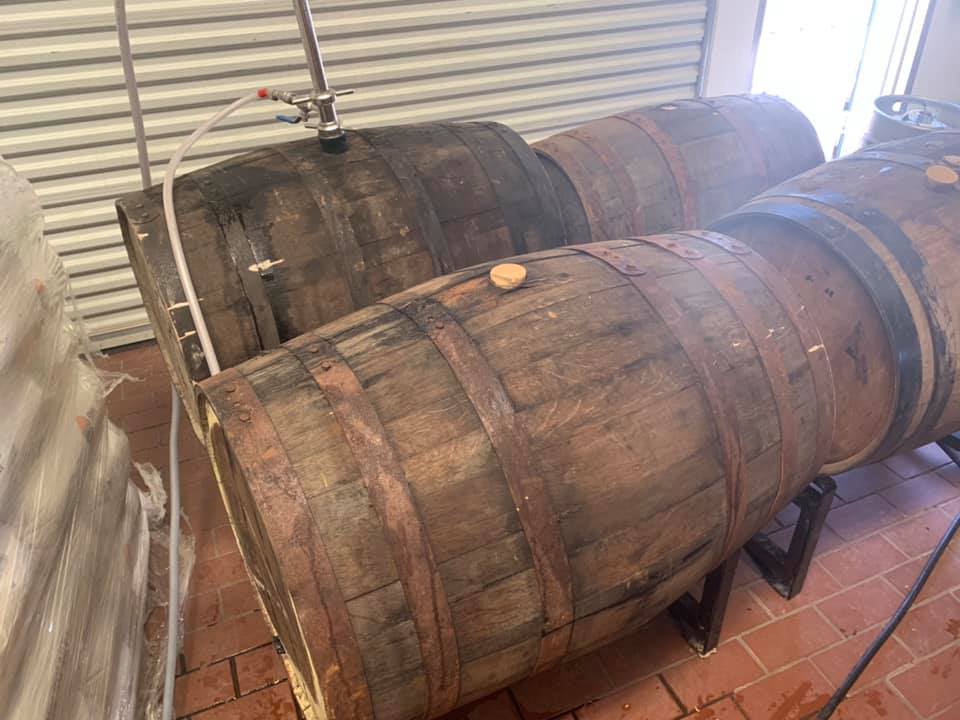 The raisin character that developed over thirteen-plus months in each barrel variant was remarkable. A complex dried fruit character mingled with the spirits seamlessly in almost every variant. The bourbon character of the Knob Creek and Buffalo Trace variants comes through beautifully, and the rum character of the the Jamaican Rum variant is seriously intense. It was strong enough to make Weedy laugh at one point. This barrel experiment further confirmed for us that rum barrels are every bit as worthy as bourbon barrels for aging big beers. The spirit just integrates beautifully with barleywines and stouts.

The Reposado Tequila variant was mostly a mystery to us until we got to try it, as we’ve never used such a barrel before. We were pleasantly surprised. The tequila character comes through mostly in the nose. There’s a distinct agave note to the aroma. In the flavor, the barrel character comes across as a bit of fruity spice and a pleasant minerality.

The Scotch Whisky variant, on the other hand, was not a surprise at all. Many of you might remember our Strong Scotch Ale Aged In Islay Scotch Casks from a few years ago. It was the Scotchiest Scotchbomb of a beer imaginable, and the Scotch Whisky barleywine variant we’re releasing on Saturday is a comparable intensity. The barrel we used previously held Laphroaig Quarter Cask whisky, and the beer took on loads of Laphroaig’s trademark intense peatiness. Think sooty chimney filled with butterscotch. We know this beer will be polarizing, but if the response is anything like it was for the Strong Scotch Ale, the people who love it will really love it. 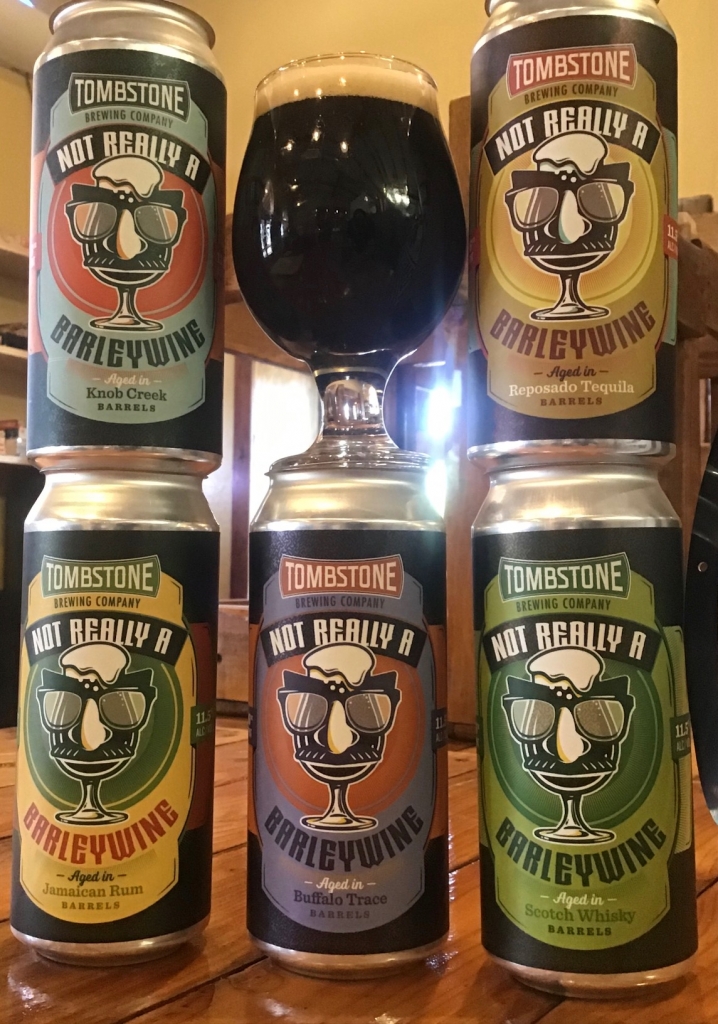 Dennis at Fezlab really knocked it out of the park with the labels. He took the idea of the beer not really being a barleywine and went with a tongue-in-cheek tulip of beer in disguise as the main image. The colors really pop. Overall, the cans definitely do the beers inside justice.

Because we still aren’t open for on-site consumption in the tap room, we are going to do this release differently. Cans will be available at the brewery as soon as they are ready to sell (that will most likely be Friday). We will make the cans available for purchase online at that time too, and we’ll hold orders for pickup for one week from the date of the order. Delivery inside of Cochise County will be available. For online orders, proxies are fine, but you’ll need to note with your order who will be picking up for you. Given that barleywines are never quite as popular as stouts or hoppy stuff, we are not expecting these to sell out quickly, but with only 120-240 cans per variant, we may be wrong. We do not currently have any distribution plans for these cans.

The final thing worth mentioning is can price. After much internal debate, we settled on $14 per can. We try to keep our margins consistent across the board, and we pride ourselves on having fair prices that are routinely far less than many breweries our size for similar products. Had this beer gone into bottles, it would have been a no-brainer to do $20 per 22oz bottle (90.9 cents per ounce) like with previous extended-barrel-aged releases. Doing $14 per can (87.5 cents per ounce) reflects the fact that cans have a slightly cheaper packaging cost per unit. We expect some people to have sticker shock given that our next most expensive cans to date cost only slightly less per 4-pack, but at the end of the day, each can is the equivalent of over 3 wine-sized (5oz) glasses of wine-strength beer made with the best ingredients money can buy and then aged in the wettest barrels we could find for over a year. We still think we’re offering a great value for a great product.

It’s hard to describe just how excited we are about these cans. We think that even barleywine purists will fall in love with the toffee raisin character and the intense barrel aroma and flavor of these beers!